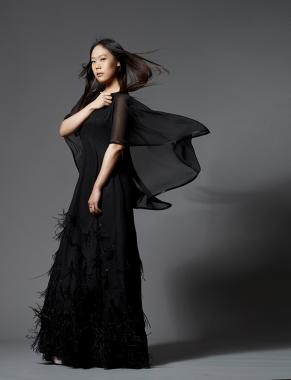 Yeol Eum was in the Usher Hall on 18 February with the Iceland Symphony Orchestra.  Here is part of David Kettle’s review in the Scotsman:

Son was astonishingly dextrous in Ravel’s one-handed dashes up and down the keyboard, but also balanced a granitic power with a sense of melting poetry, her solo passages exquisitely shaped and delivered with calm conviction. Tortelier and his orchestra, too, seemed to relish the work’s brooding menace and quicksilver mood swings in an incisive account.’

A silver medallist at two of the world’s most prestigious piano competitions - the Tchaikovsky (2011) in Moscow (Trifonov took the gold) and the Van Cliburn Competition in America in 2009, Yeol Eum Son’s graceful and timeless interpretations, crystalline touch and versatile, thrilling performances have caught the attention of audiences worldwide.  Her performance of Mozart’s Piano Concerto no.21 from the Van Cliburn competition has now reached 12 million viewings on You Tube and her more recent recording of the work with the Academy of St Martins in the Field was the last recording Sir  Neville Mariner ever made.

Yeol Eum had her debut in Scotland last summer at the East Neuk Festval when The Scotsman praised her for having found "that vital emotional connection with the music and physically embracing its raw energy and dynamic extremes with ferocious virtuosity".

Yeol Eum Son… played with a dazzling range of dynamics, patiently giving each musical idea a semi-improvisatory spontaneity… With the first piece [Ravel’s Valses Nobles et Sentimentales] she took the listener by the collar and never let go, ranging from wispy and mysterious to a murky haze of sound in the smoky final waltz… Her showmanship came to the fore in the final work, Liszt’s “Mephisto Waltz No. 1, played with booming power and devilish ferocity in the cackling multi-trills and gossamer right-hand runs.
Washington Post, 30 April 2018