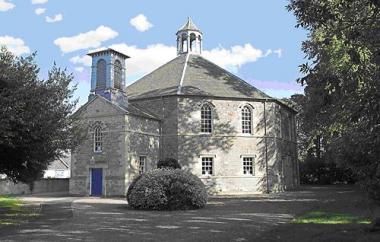 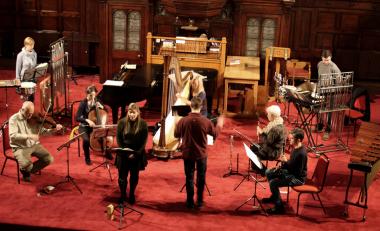 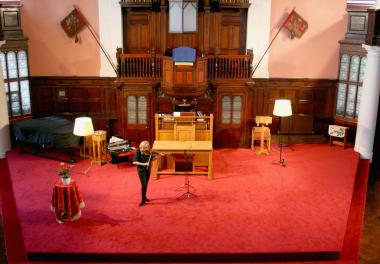 All concerts take place in

In the 13th Century the poet and would-be soothsayer, Thomas the Rhymer, predicted that the church then standing in the place of Kelso Old would collapse into a full congregation. In 1770 his prophesy began to be fulfilled when pieces of masonry fell on the worshippers beneath. A new church was called for and built in 1773 by James Nisbet, the builder of Ednam House and Paxton House.

The church was built in the form of an octagon, one of only two such churches in the UK. Inside there is a balcony around the church in the centre of which, facing the altar, the Duke of Roxburgh used to sit. Originally the church was furnished with box pews but in 1896 these were removed and the church was given a Victorian make-over with standard pews and elaborate architectural furnishings.

A new chancel has been built to house our piano which has enormously enhanced and lightened the church.

The church faces the old ruined Kelso Abbey and its graveyard and is adjacent to the large Knowes car park (TD5 7BH).

Our grand piano, a beautiful Steinway Model ‘C’, was donated to the society in 1973 by a member and it was selected for us by the great pianist Peter Wallfisch who gave the first performance on it to the society.

Since then it has been at the heart of all our concert seasons and many major pianists have performed on it including Yu Kosuge, Steven Osborne, Joanna MacGregor, Nikolai Demidenko, Martino Tirimo, Huw Watkins, Anna Tilbrook, Tom Poster, Llyr Williams, Benjamin Frith, and James Baillieu among many others.