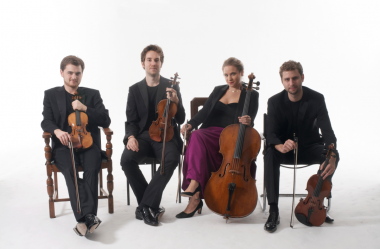 The Piattis are playing three romantic works; Mendelssohn’s moving quartet written after the early death of his sister, Fanny.  Then Ravel’s atmospheric and jazzy quartet and Brahms Quartet in A minor which takes up the whole of the second half.

The Piatti Quartet are one of the most distinguished quartets of their generation. Prizewinners at the 2015 Wigmore Hall International String Quartet Competition (formerly London), they have performed in all the major venues and festivals around the country as well as concerts throughout the world, with national broadcasts on BBC Radio, ABC (Australia), RTE (Ireland) and France Musique (France).

The Piattis continue to expand the string quartet repertoire, and are known for their work with leading British composers such as Mark Antony Turnage, Freya Waley Cohen, Darren Bloom and Jacques Cohen.

At the 2015 Wigmore Hall International (formerly the London International) String Quartet Competition, the Piatti Quartet won joint 2nd Prize as well as the St.Lawrence SQ prize and the Sidney Griller Award for the best performance of Mark-Anthony Turnage’s ‘Contusion’. The Piatti Quartet were the Richard Carne Junior Fellows in String Quartet at Trinity Laban Conservatoire of Music and Dance from 2014-16; previously they spent two years as Leverhulme Fellows at the Royal Academy of Music. The Quartet also works regularly with the CAVATINA Chamber Music Trust, helping to secure the future of chamber music by performing to young children and families in schools and venues throughout London.