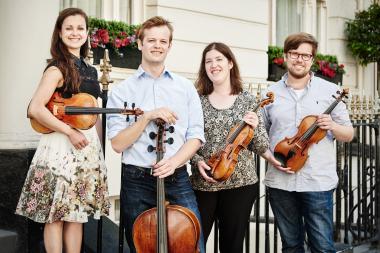 Since their first appearance in Kelso in 2013 when they came as Tunnell Award winners, The Castalian Quartet has adopted a new leader, Sini Simonen a wonderful violinist from Finland and since when they have been taken under the wing of YCAT – the Young Concert Arts Trust – who foster some of the finest young musical talents in the UK and from further afield.  Their second violin, Daniel Roberts, was a student at Kelso High School before going on to St.Marys in Edinburgh.

The Quartet has performed widely throughout Europe. Engagements this season include recitals at Wigmore Hall,  in Hitzacker, in Hannover, in Frankfurt (broadcast by NDR), the Festival de Musique de Conques in France, Festival Autunno Musicale near Naples and Turin Chamber Music Series.  They return to Aldeburgh and will be Artist in Residence at the Festival Musique d’Été à Suzette near Avignon. They continue to give recitals throughout the UK.

http://ycat.co.uk/artist/castalian-quartet/
“Their level of ensemble inter-connectedness in the Adès and at times in the subsequent movements of Brahms and Schumann was truly remarkable in evincing a physics most rare and special, overlaid with an emotional world of similarly surpassing sublimity. There were times that I simply could not believe my ears.”
Calgary Herald / Banff International Competition / September 2016