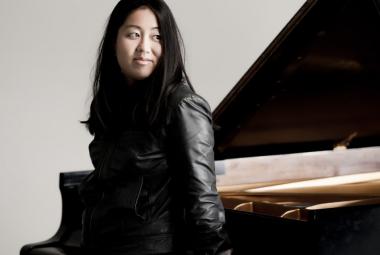 The Suntory Foundation for Arts has announced Yu Kosuge as recipient of the 48th Suntory Music Award for 2016, Japan’s most prestigious music award. The award is presented to individuals or organizations who have made an outstanding contribution to the development of Western music in Japan.
Past winners have included Mitsuko Uchida, Midori Goto, Seiji Ozawa, Kazushi Ono, Toru Takemitsu and Toshio Hosokawa.

There are many great pianists outside the UK who rarely,
if ever, appear this side of the water. Yu Kosuge is a
prime example.  The award made just a few days ago demonstrates just how highly regarded Yu Kosuge is both in Japan and in Europe.  She has just completed an Australian tour and recorded all the Beethoven sonatas.

With her superlative technique, sensitivity of touch and
profound understanding of the music she plays, Yu Kosuge
has become one of Japan’s leading pianists and one of the
most noted young pianists in the world. Now living in
Munich she appears at the most important venues and
Festivals in Europe, Asia, Russia and America both as a
recitalist and alongside the world’s great conductors such
as Seiji Ozawa, Philippe Herreweghe, Sakari Oramo,
Lawrence Foster and Charles Dutoit. , Her Carnegie Hall
debut recital met with outstanding success with critics
praising her “acutely poetic sensibility…wit, drama, and
effulgent lyricism.”

Yu Kosuge’s has made more than 15 recordings on Sony
including the Études by Listzt and Chopin, concertos by
Mendelssohn (with Seiji Ozawa) and Mozart, and, among
others, the complete 32 Piano Sonatas by Beethoven,
which will be released in a box set in Autumn 2016.

http://www.yu-kosuge.com/
Kosuge’s interpretation of Chopin’s 12 Etudes, Op. 10, was equal parts emotional and cerebral, and blissfully void of the exaggerated rubato and affectation that often burden the pieces. Fleeting moments of crystalline textures and pastoral hues gave way to the bold, tempestuous waves that Kosuge created so naturally at the keyboard.
The Washington Post